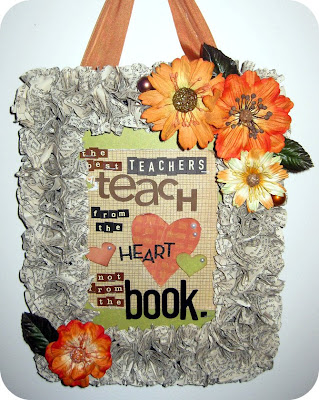 I ran across this idea on the ACOT webpage and thought it was awesome, they used it to make a Holiday wreath, but I thought that it would be perfect for a teacher's gift.  I bought a 5x7 frame at the dollar store that was ugly as ugly could be, picked up an old book at the thrift store for $.50 and punched about 200 circles to make all the blooms.  The flowers are Prima that I picked up at Michael's 40% off.  So all in all, a really great, inexpensive gift seeing everything else I already had :D  I'm getting there with the handmade gifts :D  I'm actually loving it!  I hope everyone has a great (what's left of it) weekend!!
Posted by mindy gallagher at 11:54 AM 3 comments 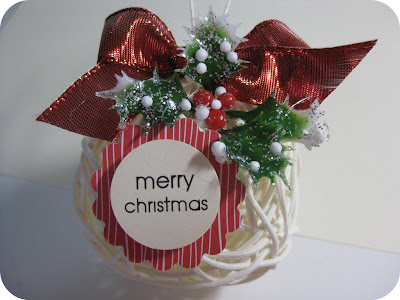 I love making homemade gifts for the holidays, I usually bake up a storm, making cinnamon oatmeal cookies, snickerdoodles, cupcakes and fancy chocolate covered pretzel rods and a few more depending on time!  I also love making ornaments, cards, etc to give with the baked goods.  I'm sure like most of you everything this season is being done on a budget!  I started picking up my baking supplies as the grocery stores had them on sale over the past month and I'm pretty much all stocked up for 1/2 the price I usually spend!  I also wanted to share with you these super cute ornaments that I made!  I made 12 ornaments for UNDER $5!  Here's the shopping list!
I took some burplap string and tied it to the ball to make a hanger.  Then I made a bow and glued it to the top, snipped off a bit of holly and glued it into the ball.  I then printed on my computer the "Merry Christmas" and punched it out with my 1/2" punch pop dotted it over a 1" scallop I punched out of the Holiday paper and hot glued it right on the ball!  So that's 12 ornaments for under $5!


What are some of the ideas that you all are working on for the holidays?  I also created a cute and simple package embellishment to hang of presents and bags to give it that special touch.  I made 48 of these for a little over $3.  I purchased the evergreen pipe cleaners at the dollar store a package of 12 for $1.  You cut the greens in half and then twist the ends together making a little wreath, and similar to the ornament the "Happy Holidays" scalloped circle.  I also purchased some thin braided holiday ribbon at Michaels and used about 1/2 of it for the 48 wreaths making the ties on the top.  I have no idea what I'm gonna do with 48, but I'll figure it out!  Haha! 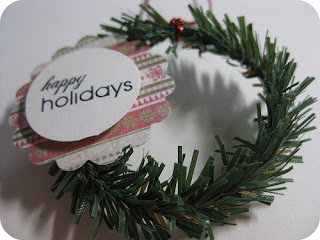 Posted by mindy gallagher at 11:49 AM 2 comments

Scrap It With a Song (Winter Wonderland) 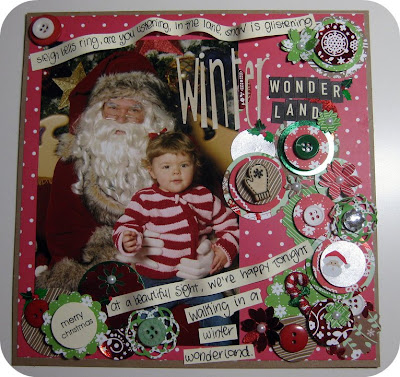 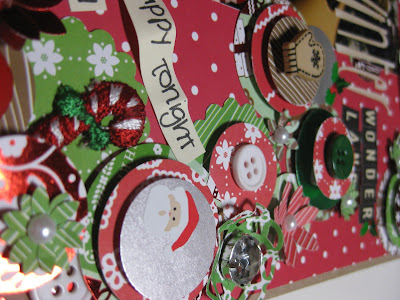 Posted by mindy gallagher at 12:01 AM 3 comments 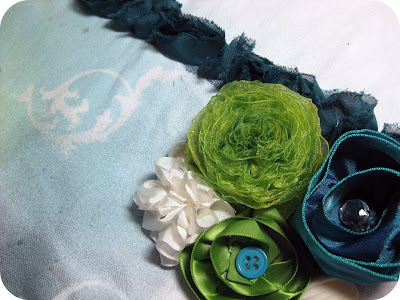 I've been having fun working on my christmas presents for this year.  I can safely post this one because she never visits my blog :D  This is a tote bag that I picked up for $5.49 for 3 at Joanns.  I glimmer misted and made some ribbon flowers to embellish.  I also made the cutest ornaments today I'll share later in the week!  I hope everyone has a great Monday!
Posted by mindy gallagher at 10:41 PM 5 comments 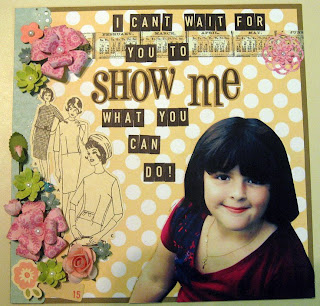 First Up: Scrap it With a Song - Challenge: ABC Jackson 5
Paper: Pretty Little Studio and October Afternoon
I love this picture of the brat, she's so beautiful.  I like how the vintage fashionista sticker has ABC on it too :D  Totally loving making my own flowers! 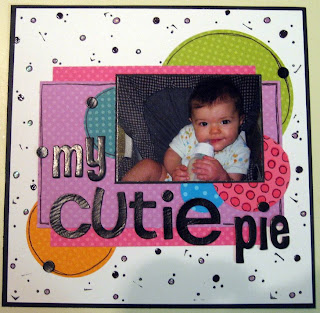 Secondly: Sketches in Thyme  Challenge: Sketch Challenge
I have this Bo Bunny Dot addiction.  I made this with my Bo Bunny scraps :D  Every little piece I save.  Alot of doodling.  Background is hand drawn and a little bit of stamping.  I think it's simple, yet cute!

Last but not least: The Paper Variety  Challenge: Sketch Challenge
I have fallen in love with Pretty Little Studio paper!  The swiss dots and the blue stripes is PLS paper.  I had some Girl Scout rub-ons to add a GS flare.  And of course the pins & bowling ball are Jolees.  This one I made for Julia's Girl Scout Album!
Thanks for Checking them all out!!! :D
Posted by mindy gallagher at 11:51 PM 14 comments 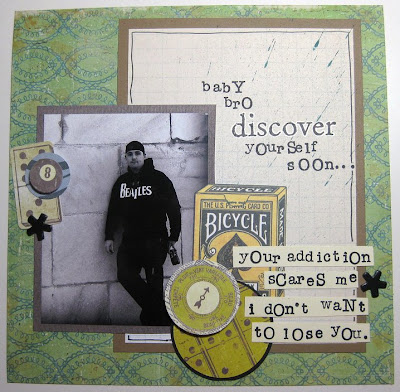 I made this layout for 2 challenges, but mostly to deal with my feelings about what's going on with my little brother lately.  I'm worried about him, he's in California, thousands of miles away from family because he's got no where to go.  He's pretty much burned all his bridges, and he's done it to himself, well his addiction has caused him to do it.  At 25 I can't imagine all what he's put himself through, makes me sad.  So basically he needs to stop playing games with his life, I don't want to lose him.  When we don't hear from him for a few days we all fear for the worst, he won't call me because he's ashamed of himself.  I miss my baby bro, hurry up and find yourself.

I made this to fit into the following challenges.
Sketch Challenge at Sketches in Thyme

And recipe challenge at The Paper Variety
Posted by mindy gallagher at 9:38 PM 16 comments 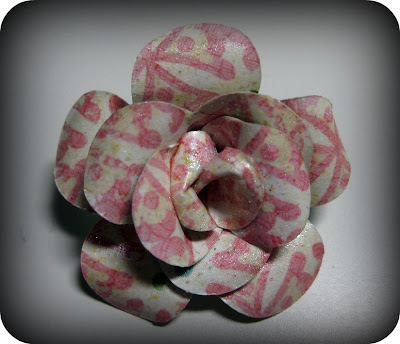 I'm sure you have all pretty much figured out that I totally love making my own flower embellishments!  I learned how to make these last night thanks to YouTube!!!  I also got so many great ideas and tips, not sure how productive 4 hours on YouTube watching flower making videos is, but HOW COOL IS THIS!!!  I'm so excited.  I made them in all different sizes, super easy.  I used the Glimmer Glam from Tattered Angels that I am totally in love with to give it a little bling!  Thanks for checking it out!
Posted by mindy gallagher at 12:15 AM 3 comments 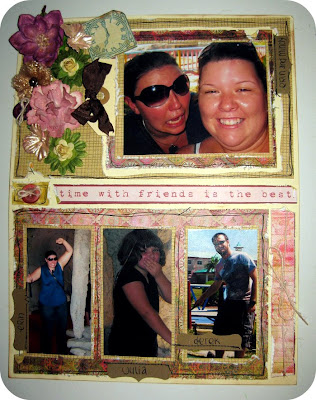 I finally made it back in the scrap-room!  Yay!  I've felt so blah and thank God that I felt semi-normal today!  So I created this 2-fer tonight!  The Paper Niche's challenge this week is the word Time and over at Scrap it With a Song it's "You've got a Friend in Me" so I created this :D  It's the first 8.5x11 that I've done in ages, But I'm really happy with it, I might try to do a few more this size.  The paper is Prima and Crate.  The flowers are mine, Prima and Mulberry.  I hope everyone has a great Wednesday!!
Posted by mindy gallagher at 12:14 AM 7 comments 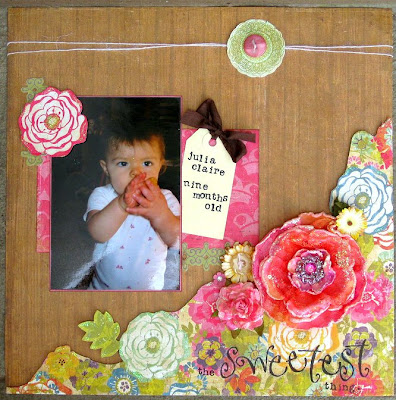 I haven't been feeling all to great this week, I didn't get much accomplished, not even my scrap room got fully cleaned.  Apparently I've developed hypertension over the past year since my last surgery and I'm kind depressed about it.  I stepped down from being a store manager because the stress was getting to me, now it seems like with the stress I'm right back where I was last year, but now I've got panic attacks and hypertension.  great.  So my dr put me on basically a water pill for the hypertension to see if that will do the trick, but I'm concerned that it's secondary hypertension and is being caused by something else.  the paranoid worry wort that I am is now why I'm giving myself the panic attacks and all that other crap.  I turned 30 and now I'm paranoid about health issues, go figure... I just need to get over it!  My best friend is having a terrible time right now dealing with Thyroid Cancer and I'm worried about hypertension, in which I'm probably doing to myself with all the panic attacks!!  sigh... I feel somewhat better now :D  Isn't this layout the cutest :D  The paper is all Crate Paper Restoration and the flowers are prima.  Here's my best friend and I out last month, keep her in your prayers, she needs them!! 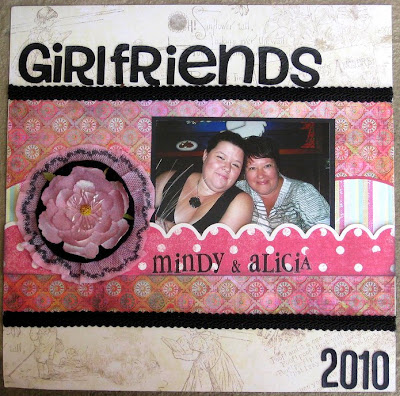 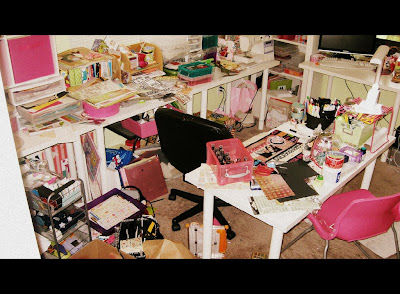 It's like something out of a horror film!  I think Michael's officially threw up in my art room!!  I don't want to clean up!!  haha!  Any volunteers?  I've been trying to work on my stuff for the Paper Niche DT call and I can't even concentrate anymore!!!  Perhaps I'll go shopping instead :)
Posted by mindy gallagher at 9:50 AM 9 comments

Congrats Jamie!  Please send me your info via email (prettylittlepaperlove at gmail.com) so I can get all your goodies out!
Thank you everyone for following and for all your wonderful
comments!  I will be hosting some more candy very soon!
Posted by mindy gallagher at 11:24 PM 0 comments

mindy gallagher
Hello there and welcome to my little papercrafting blog! My name is Mindy & I live in sunny South Florida! I love to paper craft and bake cupcakes!